"It’s a constant learning experience. That’s what I love about designing. It’s not something that is set in stone. Design is open."

William on his degree show project

I am looking at Irish wake traditions and how death was more integrated into our lives in the past. My research process was conducted through a lot of interviews and surveys. I also think death is the worst designed area, you get those cards with a generic picture of a meadow, but maybe it would be more meaningful if you got something that was related to that persons life instead.

I interviewed people first in the west of Ireland and then my second stage of research was going to urban areas, and interviewing people, in Dublin and interviewing undertakers here. The use of furniture in the house was something new to me, I discovered some families had stools and wake tables. In the city you would have a circular dining table and when folded down – it was exactly the same size as a coffin. In the country it was more benches and stools which were used for playing games at the wake to pass the time. So that’s where the idea came from for my furniture. Another path my research led me to was death on social media and the whole question of ownership. This brought me towards my project ‘Legacy’ and what we leave behind. You may not have left anything behind in the past but now everyone’s going to leave something behind through Twitter, Instagram or Facebook. What’s going to happen to this content when you die? There’s been a lot of legal issues arising around who owns this content. Facebook was built for the living but the users also die, it’s a problem that’s happening and needs to be addressed and that’s been something that’s come out of my design process.

My final outputs are to try and document this lost tradition of Irish Wakes. I’m doing a short documentary film on that and there’s going to be a book that goes along with it. The typeface I am making is based on my early stage research in graveyards. It’s going to be used in the film, book and in the whole brand. The furniture design is the part that I hope is going to address the issue of integrating death into people’s lives. 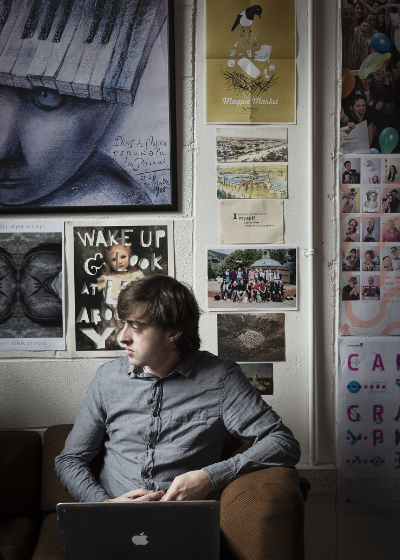 I’m very much a 3D kind of maker. I always try and make at the start and through my making I always discover something that I can bring back into the 2D or even just photograph. It’s a constant learning experience. That’s what I love about designing. It’s not something that is set in stone. Design is open. Design can be whatever you want it to be.

On his place in the world

I think the goal has to be to affect society and change habits and change the norm of what people have come to accept. I don’t need to fit-in but hopefully there’ll be a place for me. I suppose it’s unknown at the minute but there might be something good in that too. I’m not really tied to staying in Ireland. I really want to get some more experience in Europe and then come back here in a few years.

This is the place to fail. You learn from your failure. But that’s why I just try to make and do and then fail and then fail better next time and keep going. I’ve definitely learned a lot like.