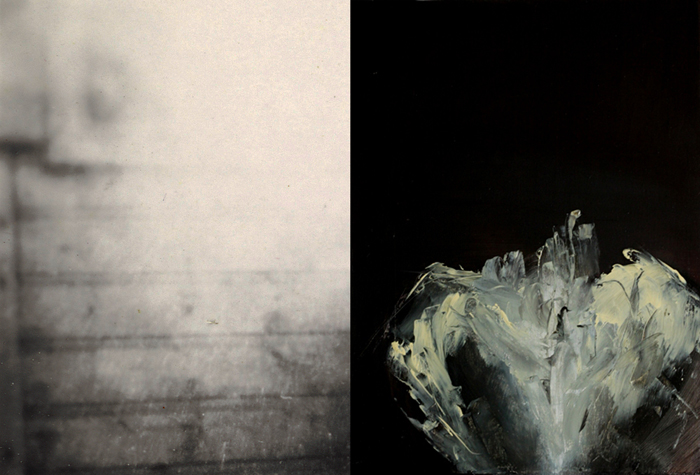 The National College of Art and Design Gallery is pleased to announce not life / necessarily, a two person exhibition featuring new work by artists Chloe Brenan and Chanelle Walshe.

In 2013 Brenan and Walshe undertook a residency in Dresden, Germany to explore the points of confluence in their respective practices in development for exhibition at NCAD Gallery. The exhibition composed of a range of media includes painting, photography and installed sound and sculptural work.

The evocative title, “not life / necessarily”, is a borrowed quote from the closing lines of the Samuel Beckett poem “Something There” (trans. 1974).  In reference here to Beckett’s poem, both artists’ practice considers and reflects on the subject of the unknowable, poetically pointing to moments likened to an oscillating point on a fulcrum; the pause in the fall of a breath, the point where consciousness gives way to slumber.

On view in the Gallery are Walshe’s intimate paintings and drawings alongside Brenan’s angular sculptural soliloquy and fragmentary photographic images. Additionally, Vignettes (2014) is a collaboratively made listening piece of literary and poetic works selected by the artists and read by Dublin based poet Annemarie Ní Churreáin.
For Culture Night 2014 on Friday 19th September the artists have selected a series of short films by and on Samuel Beckett for screening in the Harry Clark Lecture Theatre, NCAD. Please check back for listings.

* Chloe Brenan completed a Masters in the Department of Fine Art Media in NCAD 2014. She also holds a Postgraduate Diploma (distinctions) in Philosophy and Aesthetics from the Department of Philosophy at UCC (2012) and a Bachelor of Fine Arts (distinctions) in Fine Print from NCAD (2010). She has exhibited both nationally and internationally and has received awards to support her practice from Thomas Damann Trust and Culture Ireland. She has a background in archival film at the Irish Film Institute and currently lectures in the Department of First Year Studies, NCAD.

* Chanelle Walshe graduated from NCAD in 2010. Solo exhibitions include, ‘Copernicus and other systems’ at FLOORONEGALLERY in Temple Bar Gallery + Studios, Dublin, March 2013. Previous group shows include ‘Future Perfect’, The Hugh Lane Dublin City Gallery and ‘On Departure’, The Golden Thread Gallery, Belfast. Walshe was shortlisted for the EVA Award in 2013 and has undertaken residencies at Werk.Stadt.Laden, Dresden, Germany (2013) and at The good Hatchery, Co.Offaly (2011).