"The concept is more important. That’s the beautiful thing about my course - I had the freedom. It was more conceptual than just typical embroidery." 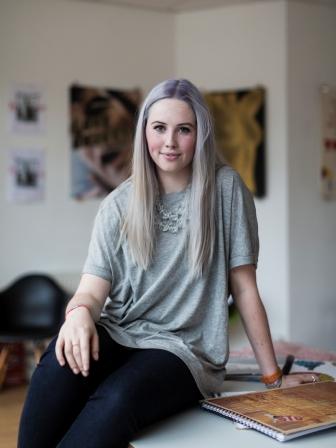 On her final year show:

I began researching masks that extend onto the body, something along the lines of some Haitian voodoo ritual. Their costumes were knitted, much like what I had done in third year, only I’d extend it onto the body. The more I looked into it the more interesting it became. Some would be camouflage, some would stick out, some would be a magpie-find with lots of things attached to their body. They have a series of characters within the festival, it’s their own form of storytelling. It’s like street theatre.

I started looking into the idea of collecting, finding, being a scavenger. I started to research bag ladies, homeless people- the collectors of our society, I think.
I found that I was really interested in their silhouettes like the idea of the bag lady, who puts on three jackets and has no neck and carries bags and is tiny and hunched. I had the idea of it being almost like The Hunger Games, like rollerball, a life or death situation. If we had this in our society, who would be those people who would have to fight for their lives to become something more than they are now. So, that’s why I thought of the homeless because they have nothing to lose. That tied into the idea of the game theory. I had to branch out my research into what kind of game theory there would be, what kind of characters would there be, what would they wear. Then I tried to tie it back to the Haitian thing - one would be camouflaged, who’d be the defender. I then did a lot of research into team sports and their costumes,  including unusual ones like astronauts. 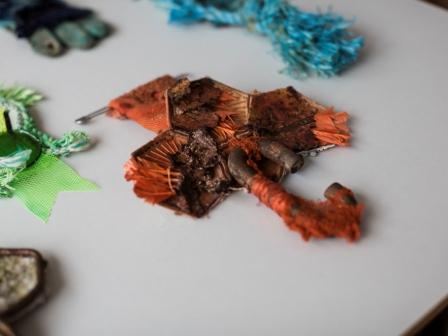 It got to the time when I wanted to actually make these characters. I went charity shopping, I found things, created things, stuffing out everyday things like the sleeping bag, relating to homelessness. I considered what is available to homeless people, what they could wear in a combat situation. It’s really just ideas, trying to think as lateraly as I can. I chose from the start to use not only found and discarded material, but material that was of an urban purpose such as footballs, shuttlecocks, sporting materials, because it tied into the game element of it all. Towards the end, I had the idea of what it is you win. What is your prize? You’re going to have a badge of honour, a medal of honour. And the medal of honour consists of the idea of a relic, you get a bit of a person. You get a piece of flesh, and this is put into the medal of honour. But it’s still beautiful. When it comes from theactual body, it has an amplified presence.

The thing for me is that the embroidery element adds to it sometimes, and sometimes it doesn’t. And the times that it doesn’t, I just let it go. It doesn’t feel like you need to lay it on. The concept is more important. That’s the beautiful thing about my course - I had the freedom. It was more conceptual than just typical embroidery. 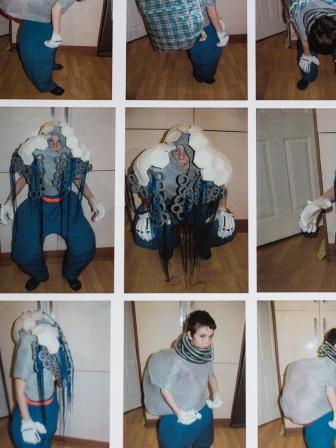 I’m interning in Brighton. I discovered through my market research, there’s this designer called Dr. Noki. So, I decided to look him up and I couldn’t find anything on him. No contact number, no email, nothing. I finally got a hold of him and sent him an email with all of my stuff and he was really happy and was really positive about everything. He’s so different. He’s anti-brand, anti-labels, sustainable. He’s original. He does these mental things with shredded t-shirts and all these masks and manipulates loads of existing garments, which is what I’m really into. It seems like he’s going to let me have a serious amount of fun with a lot of bits of found things which is what I already love to do, so I can’t wait. It’ll be amazing.