Salvation through Art? Third-level art education in an Irish prison 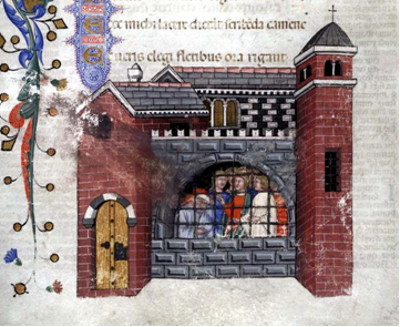 Written on death row, Boethius’ The Consolation of Philosophy (524) was one of the most widely read books in medieval times. In the above image we see Boethius writing in his cell, accompanied by the liberal arts and the figure of Philosophia, who enabled him to overcome, or at least cope with, all the trials of life. However, when Philosophia saw that the muses of poetry were also present in the cell, she flashed in anger:

Who has suffered these seducing mummers to approach this sick man? Never do they support those in sorrow by any healing remedies, but rather do ever foster the sorrow by poisonous sweets. These are they who stifle the fruit-bearing harvest of reason with the barren briars of the passions: they free not the minds of men from disease, but accustom them thereto (Boethius, 1902 (524), p.3).

This Platonic hostility to the arts is betrayed by the form of the book itself, in which the reader encounters Philosophia ‘in an already doubly allegorized library: a library of the mind within the library of the text, both of them inscribed within the pages of a book’ (Selcer, 2010, p. 50). Philosophia consoles Boethius by reminding him that God knows all time as the present, thus giving future events the certainty which makes them proper objects of knowledge, while retaining their indeterminacy for us (Marenbon, 2010, Section 6). As the only real human freedom in this schema lies in the contemplation of God – or the dictatorship of the proletariat – education has a moral purpose, directing us to the ultimate good, away from the passions and bourgeois comforts. The Platonic and early Christian refusal to accept contingency as the human lot meant that this world was endurable only through the hope of a better world hereafter (Russell, 1945, p. 304). As Kołakowski (2005) argues, this soteriological outlook is shared by the religious and the revolutionary – especially those like Boethius, Gramsci and Negri, but also Hitler, who have been imprisoned for their politics. Does an art education return us to our passions, as Philosophia alleges, distracting us from the struggle for Utopia?

The intention here is to focus on art education within the prison system in Ireland, specifically the role of the National College of Art and Design (NCAD) in Portlaoise Prison, and the idea of the prison as a site of learning. The work is grounded in a series of conversations with those involved in education within the prison system at all levels over many years. Several images will be used to explore this territory, providing historical echoes and widening the range. Some of the themes raised by Boethius, such as the revolutions of the wheel of history, the optimistic hopes for education of Schiller, Dewey and Giroux, and the tension between empowerment and emancipation for those living in Agamben’s ‘state of exception’ are central here (Agamben, 2005). The difficulty of providing a third-level art education amid the ‘consensus that education has a rehabilitative role and contributes significantly to prisoners’ successful re-entry into society’ (GHK, 2011, p. 54) is also explored.