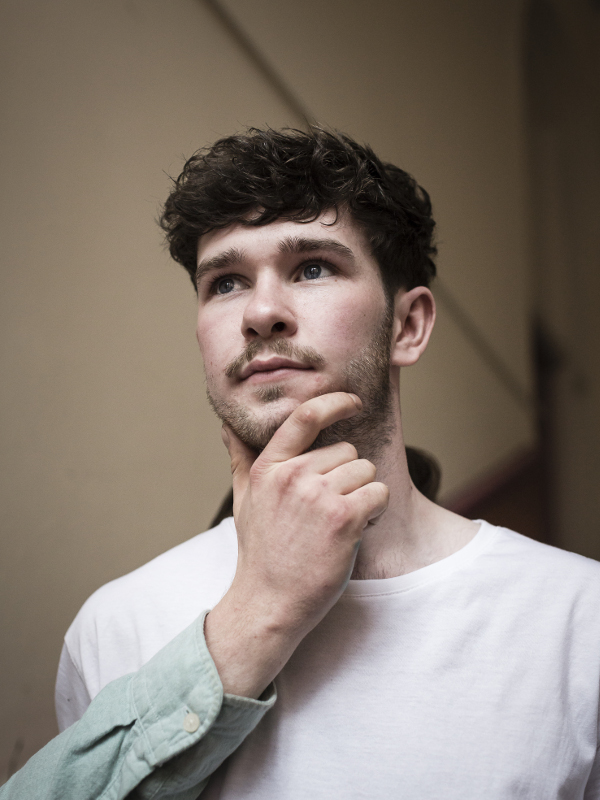 David and Ciaran on starting together

CK. We did a project in first year during a sculpture elective where we made bird suits. We strapped ourselves with bread and we were connected at the head with string and we went down to Stephen’s Green…
DR. We lay down beside the lake and just let the little birds peck at us for about an hour. That was the first time that we worked together, wasn’t it? I think the reason that came about was just because we thought it was so ridiculous and funny so if something is that ridiculous and funny I think you’d have to do it.
CK. That was in First year. It was only after I did a Media elective for two weeks that I knew it was what I wanted to do. It had a mix of everything I was interested in, sound, visual, performance and the technical skills.
DR. I was originally going to do Paint, the two-week elective completely changed my mind.

CK. Harrison and Wood would be a big influence.
DR. They’re fine artists but they use a lot of humour which I think is quite rare to see, I don’t know why.
CK. Also, Brass Eye would be an influence. Shows like that, humour is the best way to get a point across sometimes. I think I learned more from Bill Hicks than anything. It can be humorous but it’s still serious.

On art and humour

DR. There seems to be some sort of void that’s both art and comedy, certainly in the mainstream. It’s like artists kind of go with artists and comedians go with comedians and there’s never really a crossover.
CK. I find the idea of having to fit into a box boring. I can appreciate good stuff but I’m happy enough to say that a lot of stuff isn‘t good. I think this is one of the things driving us to make videos that are just funny for the sake of being funny.
DR. If I wasn’t working with Ciaran, I wouldn’t be doing this type of work and that’s one hundred percent. I’d definitely be doing more serious stuff.

DR. Maybe we try to compete against each other to see who can do the craziest or funniest thing?
CK. We would have a list of stuff and we’d bounce off each other and then we’d either mash ideas or else pick one to go off on. We’re so close in what we want it to look like but also what we laugh at and stuff, and what we think is good, there’s not a lot of conflict there so it only helped to expand the idea.
DR. If I say something and he doesn’t laugh, that‘s bad, if I say something and he laughs, then we can work on that. We’re only getting started ourselves as collaborative artists.

DR. I think because in first year we got away with wearing a suit made out of bread, so if that can pass as art, we can cycle around an obelisk or chase sheep around a field for ten minutes and that can probably pass as art as well.

On their most recent projects

DR. Our process is very visual, when we’re trying to think of something we kind of get up and talk and I run over this and then you throw something at my head and it bounces off my head, it’s very physical.
CK. We’d quickly do a story board and then start getting things together and then we just shoot it. We really need to do it to realise if it can be done in the way we want it to be done. And the thing about our stuff as well, I think sometimes if no one else is doing it, and it works, you should keep doing it.

CK. I think definitely we’re on our way to finding our own voice.
DR. The piece that we’re doing for the exhibition in a week is a one shot. We’re in a car park interacting with different objects and if something fails there, we have to work with the failure. We can’t start and go back.
CK. Well, we were trying to do something completely new and something that’s going to challenge us more. If it does fail, it’s a complete failure, but we’re happy to fail if that’s what it takes to make something good.

On what happens next

DR. Next up I’m going away for the summer, I’m going to San Francisco but we’ve decided that we’re probably going to do some work even though I’m in San Francisco and he’s still in Dublin. It could be kind of interesting.
CK. We’ll still collaborate next year and try and do something different.
DR. The thing about media is there’s so much scope, you can really go into so many things, production, performance, fine art, or more commercial things.
CK. You’ve got to keep your head and never get boring. CK. That fella today, he was the coolest person I’ve probably ever met to be honest.
DR. He’s up there.
CK. Yeah, he’s in the top forty.
DR. No, top fifteen.
CK. You don’t know all the people I’ve met, so …
DR. Top twenty maybe.
CK. Top twenty of yours, top forty of mine.
DR. OK.