The NCAD Gallery presents a foyer exhibition, Film and Design in Close Up, to celebrate the work of Hollywood art director Cedric Gibbons.


NCAD Gallery Foyer exhibition: Friday 2 - Friday 23 March, 2018, 11am - 5pm daily (closed Saturdays & Sundays).
Film and Design in Close Up, a one-day symposium: Friday 23 March, 11am - 6pm, Harry Clarke Lecture Theatre, NCAD. This one-day symposium is organised by the MA Design History and Material Culture programme at NCAD in conjunction with the celebration of the life and work of Cedric Gibbons which forms part of the 2018 Audi Dublin International Film Festival. 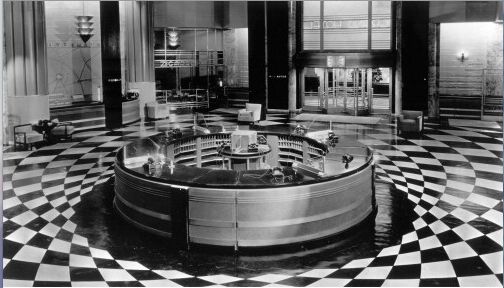 The NCAD Gallery is delighted to announce it will partner with the Audi Dublin International Film Festival 2018 (ADIFF) and the MA Design History and Material Culture programme at NCAD on an exhibition to focus on the career of Hollywood Art Director, Cedric Gibbons. Gibbons was the most successful art director in the history of cinema. His team at MGM shaped the sets, props and costumes for more than a thousand films, contributing greatly to the studio's reputation as Hollywood's number one 'dream factory.' He conceived the colossal sets of 'Ben Hur' (1925); the technicolour realm of 'The Wizard of Oz' (1939); and Van Gogh's world in 'Lust for Life' (1956). Gibbons' enthusiasm for abstract art and art deco interiors probably did more to promote the Modern Movement than the Bauhaus. He won eleven Oscars for his art direction, receiving the famous statuette that he himself had designed.

Film and Design in Close Up - a one-day symposium (ticketed - link below)
A public event on Friday 23 March 2018 putting the spotlight on the cinematic agency of sets, props and costumes in the past and present.
Reflecting on his work for the film Grand Hotel (1932) MGM's design studio head Cedric Gibbons said 'motion picture settings usually serve the purpose of providing a background for the action of the picture. Here, however, the sets take the role of an actor, becoming one of the central figures in the story'.

This one-day symposium at the NCAD on Friday 23 March will explore Gibbons' claim. Critics, cinema historians and film industry professionals will reflect on the central role played by design in cinema, putting costumes, props and sets in 'extreme close up'. How do things and spaces act on screen? How do they shape film narratives? And what are their off-screen effects on audiences and culture?

Speakers include cultural historian Luke Gibbons will explore Hollywood set design in the early sound era; Eimer Ní Mhaoldomhnaigh and Eimer Murphy will discuss their work in costume and prop design today; Elaine Sisson will examine the influence of Hollywood film design of the 1930s on Irish theatre; NCAD Director Prof. Sarah Glennie on artist Simon Fujiwara's 'The Humanizer', a proposition for an imagined Hollywood biopic; and curator Vaari Claffey, (work includes 'A MacGuffin and Some Other Things') on film props in contemporary art.

* Unfortunately, due to the adverse weather conditions and cancellation of the first symposium date, the NCAD were unable to secure the previously advertised speaker Finn Halligan. (11:45 Finn Halligan (film critic for Screen International and the author of FilmCraft: Production Design) Landmarks in the History of Screen Design)

The 2018 Audi Dublin Film Festival is supported by the Arts Council of Ireland.