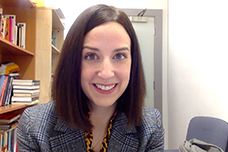 My research is at the intersection of digital cultures and cultural economies. It focuses on how digital networks are transforming ownership, value, and production particularly around ‘goods’ like information, knowledge, art and culture. It also focuses on how digital cultures are used as modes of creative and tactical resistance to these new forms of political economy. I, particular, I write a lot about money, art and algorithms and their various intersections, both in scholarly and public contexts.


Dr. Rachel O’Dwyer is a lecturer in digital cultures in the School of Visual Culture in NCAD.

Her research is at the intersection of digital cultures and cultural economies with a particular focus on money, algorithms and art.

She is an editor for Neural magazine of critical digital cultures and media art and the founding editor-in-chief of Interference, a journal of audio culture (2009 – 2017).

Rachel has published extensively on digital cultures, digital value (money, payment, cryptocurrency) and digital art in both academic and public scholarship contexts (MIT Press, Journal of Cultural Economies, Convergence, Fibreculture, Spheres Journal of Digital Culture, Institute of Network Cultures) and public scholarship contexts (London Review of Books, Circa, World Economic Forum, Longreads, UnDark, the Atlantic). She is regularly invited to present her work internationally (most recently at Moneylab, Institute of Network Cultures, Transmediale and Re:Publica). She is currently completing a book for MIT Press, Leonardo Art|Science Series on the ownership of the radio spectrum.

Designed and developed MOOC in Technology & Society for Engineers, for delivery to Thapar University, Patiala, India.

2013 – 2015      National College of Art and Design, Dublin, Adjunct Lecturer on the Masters in Design History and Material Culture.

Designed and delivered a course in Technology, Design and Society.

Advisory Group for DECODE EU Flagship project on data sovereignty for citizens across Europe and beyond;

Member of the International Association for Media & Communications Research (2015-).

O’Dwyer, R., 2018. Limited edition: Producing artificial scarcity for digital art on the blockchain and its implications for the cultural industries. Convergence.

O’Dwyer, R.,2018. A Celestial Cyberdimension: Art on the Blockchain. Circa Magazine.

‘Are you Creditworthy? The Algorithm will Decide’ UnDark Magazine, MIT, May 2018 syndicated as ‘Imperfect Score’ at Quartz.com & ‘Algorithms are judging you on your credit score. But are they getting it right?’ at World Economic Forum.

‘Blockchain Just isn’t as radical as you want it to be’, Longreads, February 2018.

‘Things that Transact: How the Internet of Things is transforming payments’ in Lovink G. Overcoming the Hype: Moneylab Reader #2, Institute of Network Cultures, Amsterdam, 2017

‘Ether’ in Paid: Tales of Cheques, Dongles and Other Money Stuff Maurer, B. and Swartz, L. MIT Press, 2017.

‘Blockchains and their Pitfalls’ in Scholz, T & Schenider, N. (ed.s) Ours to Hack and to Own: A new Vision for the future of work and a fairer Internet, OR Books, May 2016.

‘Data Politics and the Internet of things’ in Silicon Republic, December 2016

‘The Revolution will (not) be decentralized: Blockchains’ in P2P Foundation Blog, March 2015.

‘Cash or Cache?’ Mappings Art and Technology Festival, Geneva, May 2018.

‘Art and Equity: The tokenisation of art on the blockchain’ Moneylab, Institute of Network Cultures, Somerset House, London, January 2018.

‘A Cache Society: What your money is saying about you' at Re:Publica, Dublin, October 2016

‘This is Not a Cat’: A Prehistory of Mobile Networks’, Exhuming the Archive Millennium Arts Centre, Portadown, Co.  Armagh, Northern Ireland, January 2016.

‘This Band is your Band, This Band is my Band: An Economy of Radio Spectrum’ Radical Networks, New York, October 2015.

Organiser of The Robinhood Offices, a weeklong workshop and performance with the Robin Hood Minor Asset Management Agency, November 2014.

Organiser of ‘Ahead of the Game’: a Pervasive Media Workshop and Panel discussion, Project Arts Centre, Temple Bar, Dublin, June, 2011.

Curator of Sound-Space-Network an event and exhibition for the International Symposium for Electronic Arts, ISEA 2009.

Organiser of Performing in the City, A roundtable on smart cities and artistic engagement, TCD, 2009.