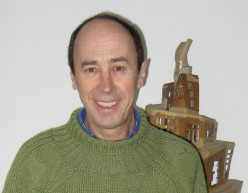 Michael Lyons’ practice incorporates painting, woodblock printing and 3D assemblage. Lyons begins each work with research and close observation using drawing to investigate his surroundings and to reexamine artworks of cultural and historical significance. His work is concerned with the structuring of contemporary life - spatially, politically and socially. Research has often manifested in narrative form, including his critically acclaimed book Ecce Heur (2001) and more recently in a series of prints relating to Théodore Géricault’s Raft of the Medusa (1819).

Lyons’ understanding of architecture and carpentry has led to a number of collaborative installations including invited participation in Bergen International Wood Festival with Meitheal Adhmaid collective, where the group received commendation for innovative design and sustainable development of materials. Lyons has more recently embarked on a personal project, utilising his practical understanding of architecture and carpentry to design and build two houses from materials both sourced and salvaged. His multifaceted practice advocates the role of the artist as an autonomous and independent thinker and maker. Through his work Lyons demonstrates the potential for ideas and creativity to exact positive social and political change.

EXHIBITIONS AND OTHER OUTCOMES