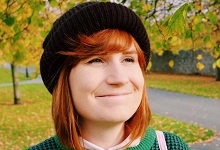 Fuchsia MacAree is an illustrator living and working in Dublin. She graduated from Visual Communication in NCAD in 2011, followed by an MA in Illustration in the University of the Arts London. Her practice involves drawing, editorial illustration, mural painting, risography and screen printing. Her work has appeared in exhibitions and publications worldwide. She is a member of the Illustrators Guild of Ireland, the Association of Illustrators, and the International Society of Typographic Designers.

Being Hear: A Book About Listening, Facebook Analog Research Lab, 2017