Head of the School of Visual Culture 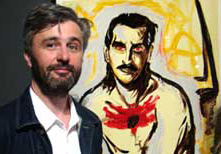 David Crowley is Head of the School of Visual Culture at NCAD. Prior to joining the college, he was a professor in the School of Humanities at the Royal College of Art, London, leading the Critical Writing in Art & Design programme there.

After studying as a design historian at the University of Brighton, the Royal College of Art and the Kraków Academy of Fine Art in the 1980s, David Crowley worked as a writer, critic and curator, as well as an academic. He has a long-standing interest in visual culture and particularly graphic design writing a book on the subject with Paul Jobling entitled Graphic Design. Representation and Reproduction since 1800 (1996). He is on the editorial board of Eye magazine and in summer 2016 he was invited to curate of the Warsaw International Poster Biennale exhibition, The Poster Remediated.

As a curator, Crowley’s other major exhibitions include Cold War Modern at the Victoria and Albert Museum in 2008–9 (co-curated with Jane Pavitt); The Power of Fantasy. Modern and Contemporary Art from Poland at BOZAR, Brussels, 2011; Sounding the Body Electric. Experimental Art and Music in Eastern Europe at Muzeum Sztuki, Łódź, 2012 and Calvert 22, London, 2013 (co-curated with Daniel Muzyczuk). His most recent show, Notes from the Underground. Alternative Art and Music in Eastern Europe 1968-1994, continues his interest in the intersections of music and visual art. First mounted in Łódź, Poland, in autumn 2016, the show opened in Berlin in spring 2018 (also co-curated with Daniel Muzyczuk).

David Crowley is a cultural historian of Eastern Europe under communist rule. His authored books include National Style and Nation-State. Design in Poland (1992) and Warsaw (2003) and he is the editor – with Susan Reid – of three landmark volumes: Socialism and Style. Material Culture in Post-war Eastern Europe (2000); Socialist Spaces. Sites of Everyday Life in the Eastern Bloc (2003); and Pleasures in Socialism: Leisure and Luxury in the Eastern Bloc (2010). His book, Ultra Sounds. The Sonic Art of Polish Radio Experimental Studio was published in 2019.

In the last few years David Crowley has presented his research in talks at MoMA in NYC; Yale School of Architecture; The Garage Museum of Contemporary Art in Moscow; Tate Modern in London; Tropenmuseum in Leiden; The Heyman Center for the Humanities at Columbia University, NYC; The Getty in LA; ETH Zurich; the Catholic University of Santiago, Chile; the Venice Architecture Biennale; Zentrum für Zeithistorische Forschung in Potsdam and elsewhere.

David Crowley is currently working on a book and exhibition project provisionally entitled ‘The Avant-garde in Old Age’ which explores how visionary artist and designers associated with the Bauhaus and radical movements of the 1920s experienced the future that they had once predicted. He is also on the management team of a EU-funded international research project into the history of dissent in Eastern Europe under communist rule, Nep4Dissent.