"With the pieces I am highlighting the idea of hair being a a ritual symbol or memorial piece. I’m trying to modernise it and bring it into the public eye."

Rebecca on her final year project 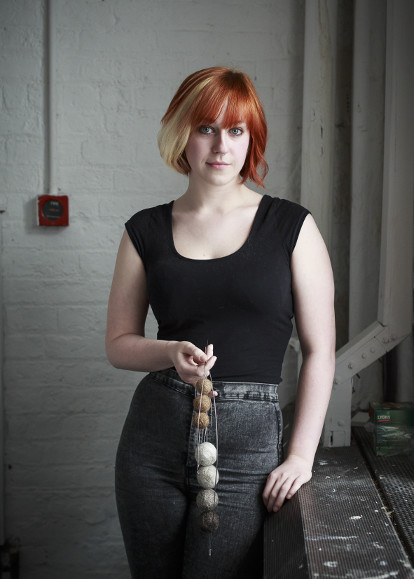 For my show I started looking at hair and how it’s intrinsically linked to our personalities. My pieces are asymmetrical but simple, it’s almost like the hair is floating. Most of the pieces use stainless steel wire, it’s a secondary element but I think it enhances the chunkiness of the hair. With the pieces I am highlighting the idea of hair being a a ritual symbol or memorial piece. I’m trying to modernise it and bring it into the public eye. Hair is one of those things that is, on one hand valued but in another way is completely vile and you know, you find it in the plughole. It was suggested I make them more vile and accentuate the ugly. I wanted them to be respectable and tactile, I wanted people to be intrigued and a little bit taken aback at the same time.

Well it’s been a very long time in the making. I had a completely different idea at the start of the year. I experimented with some felt, but it was safe and easy, so I moved to hair. I started to try and dreadlock the hair into these long, woven, cigar-like structures. But they were not malleable, they don’t curve and curl. I was also looking at the sculptures of Alexander Calder, he was a major inspiration for me in forming the pieces. It’s been an experiment but I think it’s been challenging and rewarding at the same time. 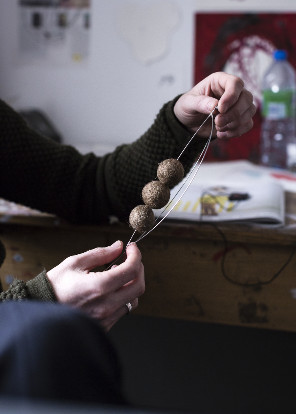 Our year were all so dedicated, we’re so enthused about what we’re doing, we’re having a great time with it, there have been some tears and some stress but I think we’re going to have a really good show. As well as the show we’re attending an expo called New Designers in Islington in London, it’s quite a great springboard for us into the world of either contemporary jewellery or silversmithing. Hopefully we’ll stay in touch after that. No matter what happens though, NCAD has all been about shared learning and shared experiences and I feel like no matter where I go, I’m always going to have a connection with artistic people and creative people.